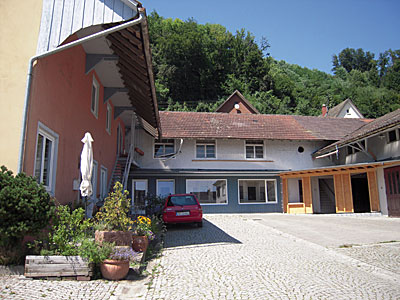 The property which we bought with the newly renovated glass engraving workshop. A message which we received in December, 2011 initiated a number of changes. Our landlord at the time had filed for bankruptcy and we were faced with the possibility of having to move. We examined possible alternative locations, but in the end, the financial support of two Lichtblick members, a generous donation and an interest-free loan enabled us to purchase our rooms as well as adjoining sections of the building.

Renovation
Our little workshop in Schwörstadt, Germany, which, with the help of friends and our landlord, we had simply and lovingly renovated, was extended. We were also able to plant a small garden which shields us somewhat from the heavy traffic on the street. Further donations and loans have enabled us to transform parts of the building into a glass engraving workshop with six workplaces and to begin the glass engraving training.

In summer 2013 Marianne Altmaier finished a copper red glass for the Raphael Therapy Centre in her new engraving workshop. Through her illness the planned Training in glass engraving had to be postponed. Marianne died in November 2013 just before the graduation of the first group of glass therapists.

The impulse continues
Through the death of Marianne Altmaier it was a question how to find a successor to carry this impulse into the future. At first, Lucien Turci took on the leadership of this project. And since April 2014 Friedlinde Meier has been working with Lichtblick. She is responsible for continuing education and metal colour light therapy research. She is a curative eurythmist and metal colour light therapist and was trained by Marianne Altmaier. 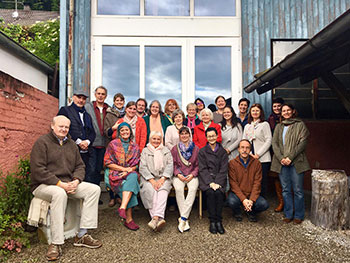 The group of therapists and teachers at Whitsun 2019 The metal colour light therapists at the centre
of the impulse
The group of trained therapists has now become the central pillar for the farther development of metal colour light therapy. This has become an important forum for the exchange of experiences. We are doing research, exchanging our results, and contributions are gathered for publications about the healing effect of the glasses. In this group new ideas also arise for the next therapeutic training. Manifold experiences in different therapeutic realms are gathered together and shape the farther development of this therapy. Friedlinde Meier holds a ‚red thread‘ for this group through contact with people in different institutions, professions, countries and cultures.

A Centre for research and development of metal colour light therapy
In August, 2014, we were able to insulate and install heating in an unheated room already in use. Now we are able to hold seminars for small groups, work with test persons, and offer metal colour light therapy here in Schwörstadt in the cooler times of the year. With these renovations we have come closer to realizing Marianne Altmaier’s vision of having a centre for researching and developing metal colour light therapy on an anthroposophical basis here in Schwörstadt. At this point in time, though the space is small, everything is available for the transformation of the basic substances into glass, for the following transformation of that glass into a therapeutic medium, its therapeutic use and the training of individuals as therapists. - Through the continuous development of the impulse it would be urgently neccessary to have a larger room to meet in, extra sanitary rooms, and a larger kitchen.

Further training and seminars in glass engraving
In August 2019 the third training course began with 17 people from Australia, USA, Finland, Sweden, France, England, Switzerland and Germany. In September a weekend seminar in glass engraving took place. Quite a number of people come towards us, who are interested to learn this technique of engraving which was developed by Assja Turgeniev together with Rudolf Steiner and which was used to make the windows of the first Goetheanum.

Regular events
After a pause we started again to present the various aspects of our work in a yearly Open Day. All events of our association can be found under the heading ‚Events‘.